Social pathologies, including schizophrenia, autism and social phobia, are mainly characterized by difficulties in interaction with others. This causes much suffering both for the patients and those that surround them. The AlterEgo European project aims to develop and test, in a three years term, an innovative rehabilitation method to improve such relational deficits, using humanoid robotics and virtual reality.

The project is rooted in a new transdisciplinary theory burgeoning in movement neuroscience and cognitive science: the theory of similarity. This theory suggests that it is easier to socially interact with someone who looks like us. This resemblance can be morphological (form of my alterego), behavioural (his/her actions), or kinematic (the way he/she moves).

AlterEgo foresees real-time manipulations of these similarity clues. The patient will be placed in interactive situations with a virtual agent. In the early stage of rehabilitation, the virtual agent, displayed on a screen, will be the alterego of the patient, more reassuring since similar. In later stages, the patient will face a humanoid robot – the European iCub robot – or the clinician. Changes in appearance and behaviour, during the interaction, will be introduced very gradually. We will thus test, over periods of six months, a new rehabilitation method reducing the interaction deficits of these patients by the virtue of more or less socially neutral artificial agents. 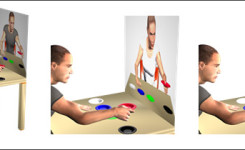 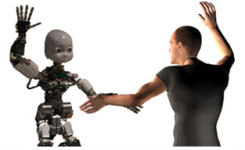 The AlterEgo project is one of the 17 laureates (250 submissions) of the last European call – ICT 2.9 – Cognitive Sciences and robotics – launched in 2012 by the European commission. It is coordinated by Pr. Benoît Bardy, director of the EuroMov centre (Movement & Health research unit) at Montpellier 1 University in France. In synergy with the french movement scientists, the project involves computer science experts from the DFKI centre (Germany), mathematicians from the University of Bristol (UK), roboticists from the Ecole Polytechnique Fédérale de Lausanne (CH), as well as clinicians, psychologists and psychiatrists from the Academic Hospital of Montpellier (CHRU, FR).

More information can be found on the project site: http://www.euromov.eu/alterego/homepage