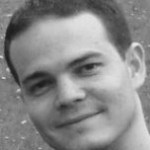 Christiano Couto Gava finished his studies in Electrical Engineering in 2003 at the Federal University of Espírito Santo, Brazil. During his Master studies in the same university he worked with robot formation control based on omnidirectional vision and non-linear control techniques.

After receiving his Master’s degree in 2007 he spent one year in Kaiserslautern – Germany as a research member of the Project PROBRAL, a cooperation project between Brazil and Germany, working in the Robotics Research Lab at the University of Kaiserslautern. During this period, he addressed the problem of outdoor robot localization based on computer vision.

Since July 2009 he is a PhD student of the University of Kaiserslautern joining the Augmented Vision group at the German Research Center for Artificial Intelligence in the context of the Project CAPTURE.