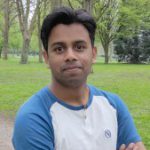 He has worked in industry for 2 years and 4 months in Samsung Electronics, India as an Android developer during 2012-2014. He was actively involved in the development of TouchWiz Home (android native launcher) app for Galaxy smartphones like S4, S5, and Note3. During 2015-2017, he was involved in several research projects namely “Augmentation in Mobile Phones, Dense Visual Odometry and Non-rigid Structure from Motion” as an intern at DFKI GmbH, Kaiserslautern. His current research focus is in the direction of Autonomous Driving and Semantic Scene Understanding.