LARA is a European Project aiming at developing a new mobile device for helping employees of utilities companies in their work on the field. The device to be developed – called the LARA System – consists of a tactile tablet and a set of sensors that can geolocalise the device using the European GALILEO system and EGNOS capabilities.

The LARA system is produced under a collaborative work where different players, SMEs, large companies, universities and research institutes are contributing with different expertise.

The LARA system is a mobile device for utility field workers. In practice, this device will guide the field workers in underground utilities to ‘see’ what is happening underworld, like an “x-ray image” of the underground infrastructure. The system is using Augmented Reality interfaces to render the complex 3D models of the underground utilities infrastructure such as water, gas, electricity, etc. in an approach that is easily understandable and useful during field work. 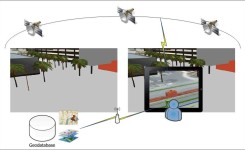 The end user is a technician working in public or private company operating an underground network in the utilities sector (electricity, gas, water or sewage). His role in the company is to plan interventions on the network such as repairs and control and execute the planned operations on site with his team.

The typical scenario of the usage of the LARA system is divided into several steps: