The goal of the SwarmTrack project is the research and development of a novel method for accurate automatic tracking of objects moving in groups.

A common problem in object tracking are occlusions, where moving objects or static parts of the scene obstruct the view on the target objects. This may lead to tracking loss or wrong assignment of identity labels. Another important issue is confusion where nearby objects have a similar or identical appearance. This may lead to errors in the identity assignment, where labels are switched between objects.

SwarmTrack investigates possibilities for exploiting the group structure in the spatial and temporal domain to derive clues and constraints for correct identity assignment after occlusions and in the presence of similar objects. Such clues include the spatial arrangement of the tracked objects and its changes over time as well as motion continuity and coherency constraints. Furthermore, SwarmTrack investigates methods for the automatic creation of coherent groups as well as updating them, when objects leave the group or new objects join.

The resulting multi-target tracking approach has applications in traffic monitoring and analysis as well as other fields where objects move coherently in groups. 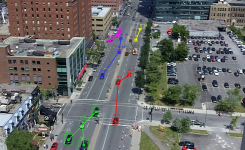 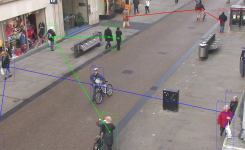